Last year in February, I was intending to create a raspberry cider, but I had a quart jar of dried sumac berries, so I decided to give that a try. 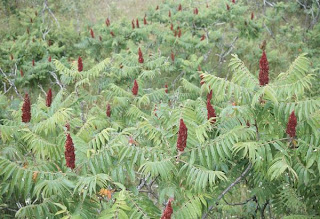 Poison sumac has white berries and grows in more swampy areas.  I have never seen it first hand, but I know the red spires are safe on either the furry Staghorn or the smooth varieties.  Sumac can be made into tea as I described here and it can also be used as a spice.

Later I will post our experiments with cider from scratch, but this was my first batch and I used concentrated apple juice.

Here's the recipe I used and a review:

Blended sumac berries in water and filtered through lined funnel.
Filled brew pot with water passed through berries
Brought to a boil
Briefly steeped the tea bag
Skimmed sumac berries off surface
Added honey and corn sugar
Also added 1 can of AJ and 1 can of AR
Boiled and then mixed with rest of cans and water

A year later and the cider is very drinkable.  It is very dry and very carbonated.  In the future, I would increase the sumac content (it gave the cider an excellent red color and the tannins created a great base to add complexity).  I will also use 4-5 tea bags.

Also, I am looking to experiment with two methods for sweet, carbonated cider.  You can either pasteurize by adding more than priming sugar and then killing the yeast in the bottle (potential for bottle bombs) or you can sweeten with an unfermentable sugar (like Xylitol).

Finally, now that I have made fresh, homemade cider, I will be retiring the concentrated apple juice.